Posted at 09:52h in Local News by roostadmin 0 Comments
0 Likes

Event organizers met at Titus Mountain in Malone, N.Y., a new ESWG venue, on Tuesday afternoon to unveil plans that have been in discussion for several years and marks a significant turning point in what is already the largest community-supported collection of athletic games in the nation.

The ESWG Organizing Committee is anticipating some 1,700 athletes in 23 sports, including many adaptive athletes.

An Opening Ceremony is planned for 6 p.m. Thursday, Feb. 4, in Lake Placid’s 1980 Herb Brooks Arena, highlighted by a Parade of Athletes. The Opening Ceremony will be preceded by a torch run.

The 2016 edition of the annual event dates back to 1981. It will offer the classic and traditional winter events in the Lake Placid, Wilmington, Tupper Lake and Paul Smiths Adirondack region.

“We’ve thought about this for a while now,” said ESWG coordinator James McKenna. “Our group has felt all along that for these Games to reach a new level, and appeal to a new generation of athlete, we had to move in the direction of contemporary, extreme sports. We believe we have done it.”

In addition, a total of $12,000 will be awarded to open class medal winners in non-sanctioned events at Mount Pisgah, Titus Mountain and Whiteface Mountain. Organizers hope this will spur even more participant interest and future growth in these events.

Also, by initiating an aggressive marketing approach, the ESWG is reaching across the border to attract Canadian athletes for the first time in the event’s 36 year history.

To facilitate these additional adventure sports, McKenna brought in long-time event organizer and marketer Tait Wardlaw, who made a presentation to the Titus Mountain audience, outlining the scope of these events and races.

The 2016 Games will debut three new winter bike events at Mount Pisgah, as well as a new Big Air competition for skiers and snowboarders at Titus Mountain.

“The sports included represent those that are indigenous to the region and reflect the best of regional passions,” said Wardlaw. “Skiers and snowboarders will ride the biggest slopestyle course that this area has ever seen. This is thanks to Titus Mountain’s commitment to the Games.”

Slopestyle features a variety of diverse features in the snow, ranging from jumps, to rollers, to tabletops, rails and more. The two Titus Mountain events will be held under the lights in front of the base lodge.

Winter cyclists will race cross country on a course around and up the Mount Pisgah trails.

There is also a Winter Bike Cross race, which will find competitors racing down the mountain over rolls, woops and jumps in elimination heats of four competitors.

The finalists in Winter Bike Cross will display their skill and nerve in a Saturday evening event. On Sunday, the first ever Winter Bike Enduro, a hybrid of Cross Country and Cross, will test conditioning in the uphill section and bravado in the downhill part of the course.

The Empire State Winter Games is a community-driven event, courtesy of a partnership between ROOST, Towns of North Elba, Harrietstown, Brighton, Wilmington, Tupper Lake, Malone and Jay; Villages of Lake Placid, Tupper Lake, Saranac Lake and Malone; the counties of Essex and Franklin; the NY State Olympic Regional Development Authority, and State Senator Betty Little. LPEC Quality Destination, Inc., a subsidiary of ROOST, is a 501(c) (3) not-for-profit, and is fiscally responsible for the ESWG. 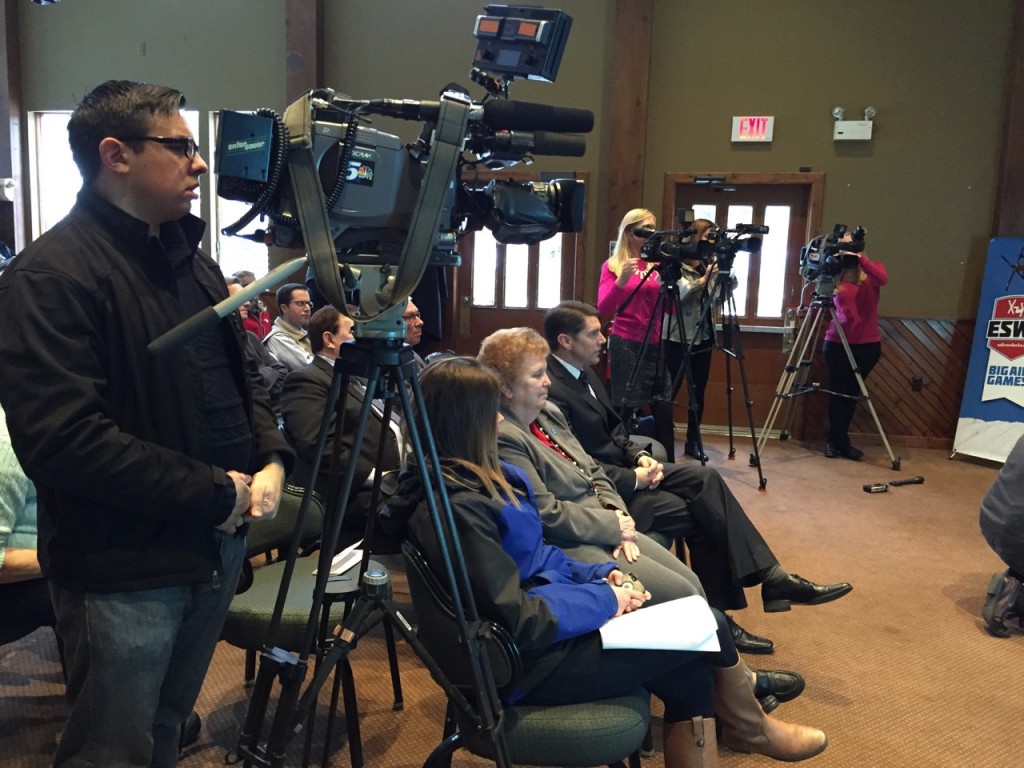