Team ROOST could be found at Adirondack Day in Albany promoting the region to legislators, and at the Empire State Tourism Conference hosted by the NYS Tourism Industry Association in Albany last month.

And in addition to ongoing media communications, content development and social media distribution, the ROOST communications team was also on the road in April. Kim and Jess attended media receptions on behalf of the Adirondack region in Ottawa, Montreal, Toronto and New York City. The events were organized by I Love New York and facilitated interaction with some top travel media and tour operators in those feeder markets. 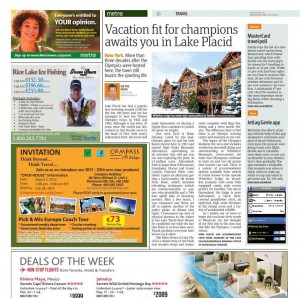 In case you missed them, following are links to some of the most recent articles that feature our Adirondack Destinations!