Posted at 08:42h in Local News by roostadmin 0 Comments
0 Likes 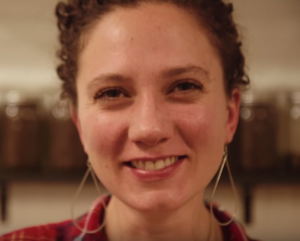 Origin Coffee Co. proprietor Jecinda Hughes is one of the newest additions to the ROOST board, starting in January of this year. The Saranac Lake businesswoman adds a youthful voice to the group.

Jecinda grew up in northeastern Tennessee, venturing to the Adirondacks in 2000 to attend Paul Smith’s College. She earned an associate degree there as the college was transitioning into a four-year school, and she took some time off to let the kinks of the  program be worked out before returning there to earn a bachelor’s degree.

During her time at Paul Smith’s, she got the opportunity to travel to Costa Rica as part of a travel tourism program, and she stayed on a coffee farm there. She found out that coffee has as many complexities to it as wine does, and started to get into learning about it as a hobby.

In typical Adirondack fashion, Jecinda generally worked in a restaurant as a second job while doing office work as a her day job. She always found that she was more passionate about the restaurant work, though, and would wish she was there while in the office each day.

She always loved Saranac Lake, and she bought a house here six years ago, knowing it was where she wanted to raise her daughter and stay for the foreseeable future.

But she knew she needed to turn her passion into her full-time job. She had always loved Bean-to, Saranac Lake’s previous coffee shop, and felt a void in the community when it closed, since coffee shops often serve as such an important community gathering space.

So she started working on a business plan, and when the space became available, she took over the lease at 77 Main St. For about four-and-a-half months, she was busy all the time managing and helping with the complete conversion of the space from a retail store to a coffee shop, and finally, Origin Coffee Co. opened on June 11, 2015.

In the year the coffee shop has been open, Jecinda has been pleased with space it has carved out in the community. A strong core of local customers helped the shop break even through one of the most difficult winters, tourism-wise, in recent memory. And she looks forward to the Hotel Saranac’s reopening, which she hopes will inspire a more vibrant downtown and will take Origin to a whole new level.

Getting involved with ROOST

Jecinda jumped at the chance to join the ROOST board. She had worked with ROOST in the past, especially when she worked at the Adirondack North Country Association for two years — the two organizations collaborate frequently, since ANCA focuses on economic development, and tourism is such an important part of economic development in the North Country. She was aware that the impact that ROOST has on the region is huge, so she was happy to get a chance to be able to help with that in any way.

She has spent her time on the board so far getting familiar with the back end of how ROOST works as an organization and learning its larger, overarching goals that sometimes get lost in general public discussion. Then she expects to be able to contribute more and see where her voice fits in the big picture.

Since ROOST’s reach has grown significantly and covers so much area, Jecinda thinks it’s important to have representatives from each region in that area, and she wants to be a strong voice for Saranac Lake on the board. She also wants to be a voice for the younger generation of business owners, noting that Saranac Lake has seen a whole slew of younger entrepreneurs lately, accounting for 40 new jobs in the area.

Check out this video that ROOST created before Jecinda joined the board: