ZOMBIES INVADE TUPPER LAKE: Feed the hungry, not the zombies

Posted at 16:33h in Local News by roostadmin 0 Comments
0 Likes

TUPPER LAKE — On Saturday, Oct. 11, the streets of Tupper Lake will become undead as the first ever Zombie Walk converges on the town to collect food for the Tupper Lake Community Food Pantry.

The first ever Tupper Lake Zombie Walk is a day-long event that will cater to the young and old. The fun gets underway at 3 p.m. as Park Street is transformed into an apocalyptic warzone. Like something out of “The Walking Dead,” scores of zombies will trudge from business to business. But instead of collecting brains, they will collect non-perishable food items for the local food pantry.

“Zombies are really big now,” said town Youth Activities Director Mike Fritts. “This isn’t going to be anything too horrifying as we want as many kids as possible to participate. It’s just planned as a fun, family day that explores and recreates a popular genre while donating to a worthy cause.”

Anyone who wants to participate can come dressed as a zombie and converge on Park Street, collecting food from each business along the street and placing it a centralized location. The street littered with zombies will surely be a sight to see, so those who want to watch are welcome – but be sure to keep a safe distance from the zombies! The activities on Park Street will culminate with participants lining up and parading down the road.

At 4:30 p.m., the massive horde will converge onto the Municipal Park for nighttime festivities.

Live music will also be featured, with local band The Jones Boys and Nineball, a crowd-pleasing band from Utica, entertaining the living and undead alike. In between acts, there will be contests with prizes including Best Zombie Costume, Best Zombie Growl and Best Zombie Walk.

Also at the park, a target range will be set up for any survivalists who want to prevent zombie attacks. Head there to practice with paintball guns and take aim at some zombie targets. Those who would prefer to become a zombie can head over to one of the event’s makeup artists, who will assist in turning living people into the undead.

To keep up your strength, vendors will be selling burgers, hot dogs and other food – just don’t feed the zombies!

All events and activities are free, however organizers ask that attendees bring non-perishable food items, which will be donated to the local food pantry, to the festivities at the park. 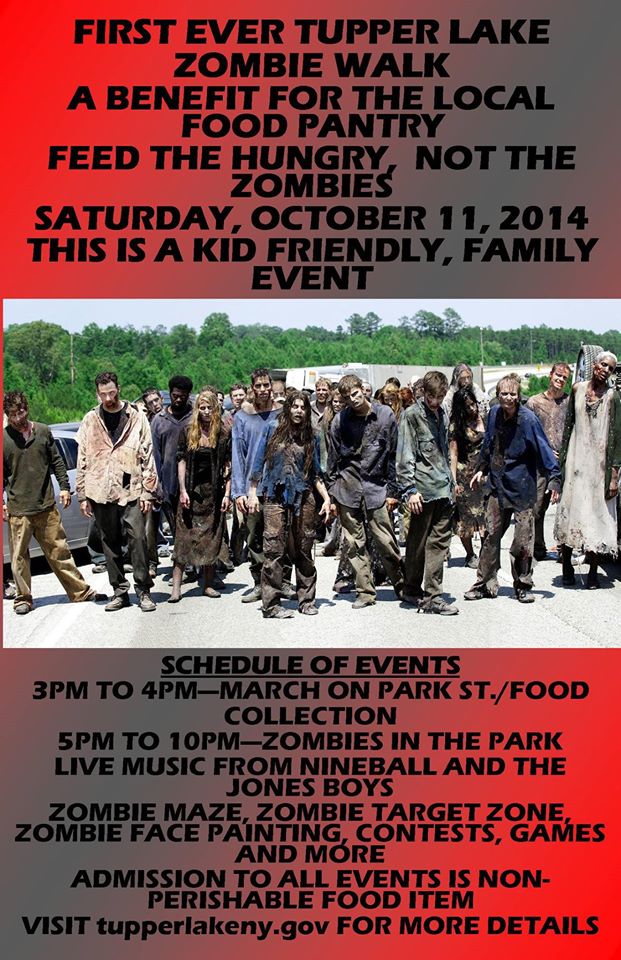