Lake Placid, adirondacks, usa — A delegation of 36 individuals from the World Union of Olympic Cities (WUOC) was in Lake Placid this week to visit the 1980 Olympic venues and learn more about the Games’ legacy and lasting impact on the destination.

The WUOC is firmly committed to the development of exchanges of experience between cities that have hosted, or are going to host, Olympic Games or other major international sports events. The delegation traveled to Lake Placid following the conclusion of the WUOC’s annual meeting, which was held this year in Montreal. The dignitaries toured the Olympic venues during their two-day visit.

Some of the delegates that were on hand included the International Olympic Committee’s Head of Legacy Tania Braga, City of London Head of Sport Simon Cooper, Deputy Secretary General of the Beijing Olympic City Development Association Han Wen, and President of the Los Angeles Sports Council David Simon, among others.

Lake Placid was one of 15 original members of the WUOC, which now boasts 37 members overall, and Lake Placid Mayor Craig Randall is a member of the Executive Committee.

“Overall, the Olympic Winter Games have represented a vehicle for community redevelopment in Lake Placid, and we’re pleased to be able to showcase that for our International guests,” said Mayor Randall.

Lake Placid has been a winter destination since 1905, and the goal of community leaders has been to establish the destination as a world sports center and resort since the 1920s.

“In the 1920s, the Games were a mechanism for development for the 1932 Games – even in a time of national financial depression. Twice in the last 80-plus years the Games have allowed Lake Placid to achieve the community’s goals to promote a healthy lifestyle, and to establish Lake Placid as a world class sports center and resort,” Randall continued.

“The Olympic Winter Games continue to provide us with the opportunity to further strengthen Lake Placid’s presence in the international sports marketplace, and to encourage other host cities to utilize the games in the same way as they have influenced the ongoing vitality of Lake Placid, Adirondacks USA,” said James McKenna, president of the Regional Office of Sustainable Tourism and Lake Placid representative at the WUOC.

“The sustainability of the Lake Placid Venues is a model of success. We look forward to sharing our story and learning from the other Olympic City’s delegates,” said the Olympic Regional Development Authority’s President/CEO Mike Pratt. 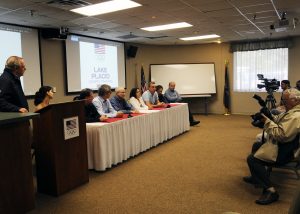